There is something exhilarating about moving quickly on the fresh tracks of a leopard. You can see the paw marks clearly in the sand, the edges still sharp and clear. Your breath quickens and you feel energized. You’re moving faster now, finding yourself in a state of flow and your breath is in sync with your movements. Then just like that you’ve found the leopard and for the next few wonderful hours you follow her as she weaves through the brush, her form like dappled light on the move. After a few hours of unsuccessful hunting attempts she retreats to the boughs of an Apple Leaf tree to rest and you follow her lead, finding an ancient fig tree to lie at the base of, whiling away the hottest part of the day. Relaxing at its base you take in the cacophony of birds calls and the rumbling of a herd of elephants communicating to each other a few hundred meters away. Recovering from the morning’s activities you notice the life moving in and around you. Nothing needs to be changed or fixed, you’re completely comfortable with everything exactly as it is.

In comparison to the yang of the living Apple Leaf trees in the photograph above, this fallen tree would be considered yin.

It would be crazy to say that the more active or restful part of the day is right or wrong, good or bad; each pace certainly has its own value. In life, just like in the wilderness, we need both and if we only ever focused on one and had none of the other we would come out of balance. Our western mindset and lifestyle encourages a never-ending doing and unlike the leopard, for the most part, we feel uncomfortable retreating to the boughs of our metaphorical Apple Leaf tree to just be.

Much of the yoga practiced today falls into the high energy yang category of movement and it is a form I personally love and teach. However there’s another type of yoga I’d like to introduce you to that may be more important now than ever before. Its name is yin.

Yin and yang in nature

Yin is described as the stable, unmoving, hidden aspect of things; yang is the changing, moving, revealing aspect. Other yin-yang polarities include cold-hot, down-up, calm-excited. In terms of nature the moon would be described as yin and the sun as yang. Of course nothing is inherently yin or yang and has some mixture of both but we use these terms to describe one thing in comparison to something else. An elephant would be described as yang in comparison to the yin of a tree because it is much more highly mobile and faster to react to stimuli. A living tree considered yin to an elephant’s yang would be considered yang in comparison to the yin of a fallen tree for similar reasons.

In comparison to the yin of the trees, the elephants would be considered yang.

In comparison to the yang of the living Apple Leaf trees in the photograph above, this fallen tree would be considered yin.

Ok, so what is yin yoga exactly?

Where Western-based yang yoga like Vinyasa or Hatha focus on strengthening and lengthening muscle, yin goes deeper and starts to work on connective tissue as well as stressing ligaments and bone in a healthy way. Through this gentle, healthy stretching and stressing of connective tissue we ultimately strengthen it and yin yoga has been shown to increase bone density. Fascia (connective tissue) networks are found all throughout the body and cover organs, bone, ligaments, muscle and so on. By targeting these through yin yoga we help the entire body to function more congruently. The practice has been shown to help with anti-aging, weight loss and reduction of stress levels amongst numerous other benefits.

How to practice yin

There are 4 main principles when approaching a yin practice.

A 40 min video to guide you through a yin yoga practice. This particular practice is aimed at supporting your body’s digestive system. Apologies for not talking into the camera during the introduction. I tried recording two different formats on two different cameras and this ended up being the best format for the blog.

The same female leopard photographed begins to stretch and become active after a period of rest. She later came down the tree and played at the base with her cub.

Animals and nature at large teach us how to live in balance through their unique ways of existing. Leopards engorge themselves on meat when they have a kill and fast for a few days after. Lions hunt and expend energy at night and rest throughout the day. In winter life recedes and in summer it returns. We’re the only species that treat ourselves like machines and keep moving and striving even when it’s no longer serving us and yin yoga is one way of introducing us to another way of living.

A full-bellied lion rests during the heat of the day, allowing his digestive system to break down his recently-eaten meal.

What I have noticed about practicing yin yoga out in the wilderness (something you could join for on our wellness safaris or retreats) and is an incredible by-product of the practice is that slowing down, quieting the verbal mind and opening up the sensing of the body helps you to connect more deeply with everything around you. From this non-verbal place we truly begin to meet nature and receive its wisdom.

You don’t need to choose between the exhilaration of tracking a leopard or the deep peace achieved by resting under an ancient tree. In fact I would never want you to. I would want you to experience the beautiful AND, not one or the other but both. Why then would we cut ourselves off from the full experience of life in the day-to-day? Allow yourself to rest, to relax, to be. If that leopard could speak I know that she’d agree. 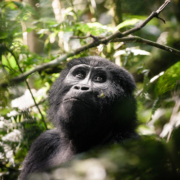 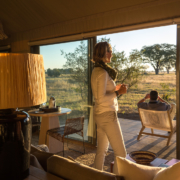 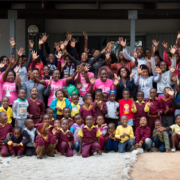 Time To Reflect: A Guest Post by Joshua Attenborough
Scroll to top