There is something in our genetic code that remembers that Africa is where all of our earliest human ancestors first evolved 2 million years ago. Wilderness guide and psychiatrist Ian McCallum puts it so well when he says, “We have to remember that our identity is intimately tied to the earth itself. To lose ones sense of union with wild places is to pre-empt what I believe is one of the most over-looked conditions in modern psychiatry – homesickness. Often presenting as a restless depression, homesickness and a loss of wildness are the same thing. The cure to homesickness is to remember where we came from and where we belong.” And once we know where we belong it is our task to return to these places to receive their medicine.

Pafuri is one such place to come home to. It jogs your genetic memory and re-awakens your sense of belonging to wild places.

Despite living in this modern era, we are best adapted to living in a natural environment. It’s likely because 99,9% of our evolutionary passage was spent as hunter-gatherers and our minds and bodies are not sufficiently prepared for what the technological era expects of us. Despite the increasingly technologically connected world we live in, it seems modern humans feel more disconnected from others every day. The results are not difficult to see. Depression, anxiety and feelings of hopelessness plague the modern human. And the cure to this lies in healing the human-nature split. We invite you take precious time out from your busy life to deep dive into an awe-inspiring immersion of pristine wilderness. Through the powerful practices of walking, meditation and yoga, we re-find our rightful place in it.

The private Pafuri concession – within the world-famous Kruger National Park – lies in a vast, almost inaccessible triangle of wilderness between the Limpopo and Luvuvhu rivers, along South Africa’s north-eastern frontier. Between them, the two great valleys embrace one of Africa’s most spectacular landscapes, with mountains and gorges in the west giving way to plains, pans, baobabs and fever tree forests in the east.

This ancient land, particularly the low-lying floodplains near the confluence at Crooks’ Corner where our camp is located, harbours an abundance of life. It’s a natural choke point for wildlife crossing from north to south and back, and forms a distinct ecological region. Huge herds of elephant, buffalo and other game congregate here, especially when the surrounding bush lies parched before the rains. Predators and scavengers, ranging from the great cats and hyenas to servals, genets, civets, caracals, amongst many others, find shelter here.

The area is also famous for its elephant herds in winter (when we are there), which come to drink from the Luvuvhu river.

The wildlife roams without the hindrance of borders in a trans-frontier park that spans 3 countries. The diversity also brings a profusion of birds, with numerous sightings in what bird lovers regard as South Africa’s most rewarding birding destination.

While comprising only about 1% of the Kruger National Park’s actual area, Pafuri contains plants and animals representing almost 75% of the Parks total diversity.

WHO IS THIS RETREAT AIMED AT?

This is an exclusive, next-level wilderness safari retreat, designed for those who’ve already done much inner journey work and self-refection, who appreciate the precious gift of long periods of silence, & who can recognise beauty in both the small and large creations of nature. A medium level of fitness is required. – Daily dawn & dusk guided walks: exploring your rightful place in the wild. We may drive to a certain point in the reserve and walk from there.

– Afternoons include a yoga practice in incredible locations followed by game drive and sundowners.

– Meditation practices aside the Luvuvhu River and atop remote rocky outcrops with vast stretches of wilderness below to expand awareness.

– Sharing our stories around the fire and under the Milky Way in the evenings.

– Free middays to relax, swim in the river, read, sleep.

– Sharing our stories around the fire, under the Milky Way.

– Free middays to relax, swim in the river, read, sleep and integrate learnings. 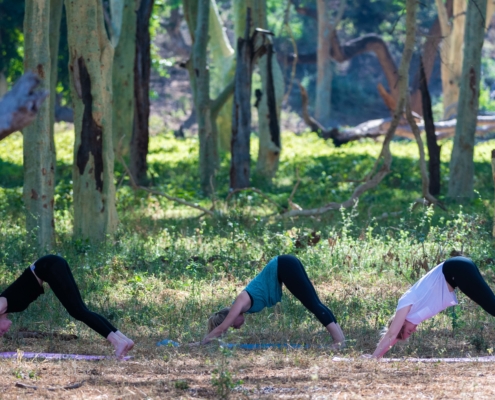 Rates are per person sharing in Meru style tents, with exquisite attention to detail, and all the necessities for your comfort – crisp linen, an ensuite bathroom, private outdoor bucket shower with water manually heated to your preference. The experience is as close to nature as you can possibly be, whilst having all creature comforts catered to.

Space strictly limited to 7 guests, and pre-booking with a non-refundable 50% deposit to reserve your place.

This Does not Include

Your investment will not include airfare, transport to and from Pafuri, conservation levy or gratuities. 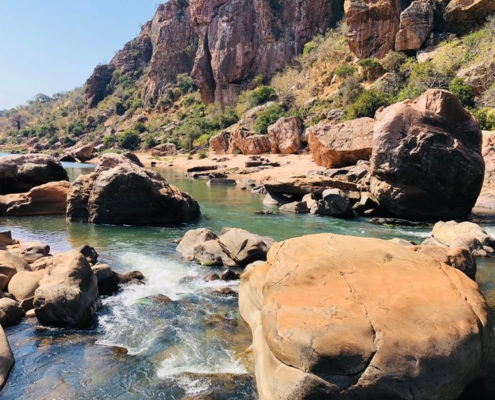 It’s true what they say about a name because being born an Attenborough, Amy doesn’t believe she ever really had much choice about what direction her life would take. After completing her Journalism and Media Studies degree Amy followed her deep love of nature to the bush. She planned to stay for a year, which quickly turned into ten.

During that time, she worked at Phinda Private Game Reserve, Ngala Private Game Reserve and Londolozi Game Reserve, some of South Africa’s most prestigious lodges. She took a particular liking to walking, spending as much time as she could on foot approaching animals with her guests. She has travelled to Botswana, Namibia, Mozambique, Zimbabwe, Tanzania, Israel, Jordan, Egypt, India, Uganda and throughout South America in search of wildlife. Her greatest adventure was living in Gabon training local guides for the WWF and Smithsonian Institute, where they spent weeks at a time living like early nomads in the dense and remote coastal forests, fulfilling a life-long dream of tracking and habituating wild gorillas.

Nature has always been her biggest teacher. Seeing how embodied and present animals are inspired Amy to begin practising yoga. She is qualified as a vinyasa and yin teacher and spent six months training under a Hatha master in Boulder, Colorado. She is also a certified Martha Beck life coach. With this mixture of passions and skills, Amy leads specialised wellness safaris that incorporate yoga, meditation, mindfulness and personalised life coaching in order to restore body, mind and spirit in the most beautiful wilderness locations on the continent. I only discovered my love for the bush in 2003, when my then boyfriend (now husband) took me on a day trip to the Kruger National Park. When a giraffe crossed the path of our car, I fell in love not only with the man sitting next to me but the wildness and adventure that the bush had to offer.

An insatiable craving for the wilderness led to a holiday home in Olifants North Game Reserve in 2007 where I started to spend extended amounts of time exploring, learning and immersing myself in nature. Since then we have done multiple trips throughout Botswana, Namibia, Mozambique, Zimbabwe, Egypt, Tanzania as well as worked in Kenya and Ghana.

I started to practice yoga in 2015. In 2018, after losing the heart for advertising, I left a 20 year career behind to practice, study and teach yoga.

In 2019, I travelled to Costa Rica to complete the Jivamukti 300 hour teacher training in the stunning wilderness area of Nosara, which got me thinking, how do I combine my passions into one?

Call it fate, serendipity or karma but a mutual friend introduced Amy and I and as they say, the rest is history.

I am extensively travelled, ridiculously organised, and very detail oriented. I am a lover of upside down poses, adventure, the beach and wilderness, and with over 600 hours of yoga training behind me now a certified Jivamukti teacher. I am currently working towards a FGASA Apprentice Field Guide qualification.

I firmly believe in embodying the tenets of my practice but first and foremost – kindness and compassion for the earth and all its beings, through my thoughts, words and actions.

Being part of the Wild Again team means combining all my passions for the bush, yoga, wellness and travel into one incredible adventure.

I cannot wait to help you plan your ultimate trip and re-connect you with Africa, its wild inhabitants and ultimately yourself.

Amy’s connection with nature is unparalleled, and we both lapped up everything she had to share with us. From her extensive knowledge on the abundant wildlife, to the amazing healing abilities of trees.

The yoga classes with Nicci were cleverly balanced. You worked hard, but somehow came out feeling relaxed and in touch with your body. Also a great combination of focus and fun. Her positive energy is infectious.

Amy and Nicci make a wonderful team. With complementary skills, they made us feel relaxed, informed, connected and happy.

It was a very well organised, refreshing and restoring retreat. We both came away feeling truly relaxed and more in touch with mother nature and ourselves. We’ve already booked our next adventure with them.

WOW, it was like a dream come true. The retreat far exceeded my expectations and I’ve learnt so much about myself and wild nature. Nicci and Amy are superb facilitators and customised the retreat in such a way that we all got what we needed and more. Everything was perfect. I have never felt so calm, peaceful and present. I really loved the retreat so, so much. You have set such a gold standard for yoga retreats and I cannot wait to go to your next one.

I am no stranger to self development work but Amy and Nicci’s approach went beyond words, which was something I haven’t experienced before. I gained so many creative and original insights about myself and what it all means, not just an observer of nature but as part of it. It was so beautifully structured that I found it effortlessly healing and rewarding. The guided walk also made me feel like a kid again and it was so much fun to re-connect with that sense of pure joy. I really am so grateful to you both – such a heart-warming weekend!

RESERVE YOUR SPOT TODAY BY EMAILING AMY AT